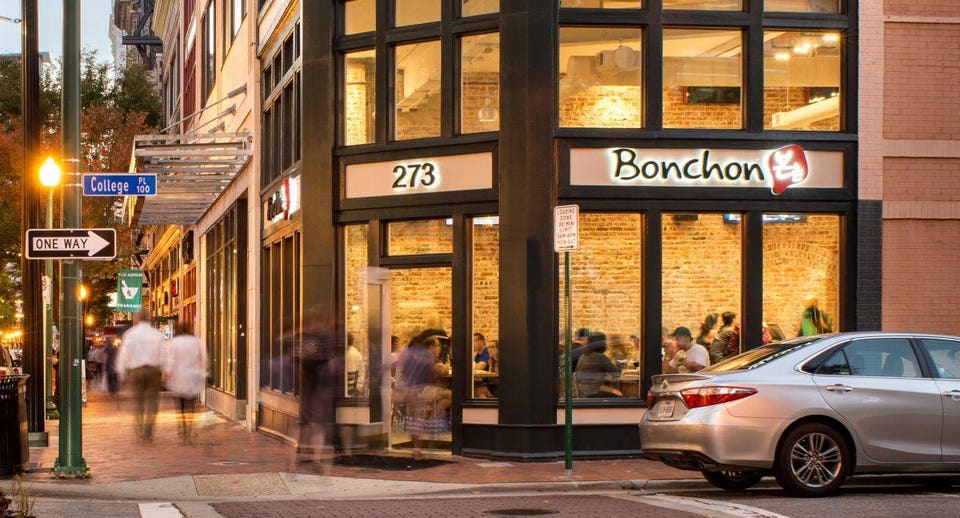 KFC may be looking over its shoulder because Bonchon, a restaurant chain specializing in Korean fried chicken is fast gaining on it. Bonchon’s revenue in 2017 grew 35% according to Technomic’s ranking of the country’s 500 largest restaurant chains.

Bonchon launched in Busan, South Korea in 2002, but expanded overseas quickly.  It opened its first American outlet in Fort Lee, New Jersey in 2006 and then moved into Manhattan soon afterwards. Then it spread to Massachusetts, Virginia, California, Texas and others.

Besides Korea, Bonchon’s are sprinkled throughout Asia in the Philippines, Thailand, Indonesia and China.

It’s known for its signature fried chicken, and prepared by using a double-frying method that was concocted by its founder Jinduk Seh.

At the Bonchon in the Chelsea area of Manhattan, its host Tony Vega pointed out the bar area where customers can choose one of eight draft beers and watch sports on TVs or the local news.  It offers sit-down dining and take-out in a no-nonsense atmosphere.

Chang: First and foremost we’re opening a number of new franchise locations. We’ve been lucky to have a loyal following, which has spread our brand through word of mouth to cities where there are no Bonchon’s. We have a unique product and don’t have many competitors that come with our flavors.

Chang: The first is the signature proprietary sauce shipped over from Korea. We have a special technique to apply the sauce that no other chain uses. We have a higher quality chicken than most chain franchises offer, and lastly, we double fry our chicken, which gives us the crisper outer layer.

What else does Bonchon specialize in?

How much is the menu in the U.S. adapted for American tastes?

Balle: Tacos are more popular here than in Asia, but our core menu of fried chicken, wings and fried rice is world-wide. We offer popcorn shrimp, fried zucchini and fried pickle only in the US

Describe the atmosphere each Bonchon is trying to create?

Chang: We want to create a fun place for friends and family to gather around a meal. We offer excellent service, music, and an atmosphere with drinks that include draft beers and soju, traditional Korean rice liquor, which is like sake.

How much of your business is based on fried chicken sales?

Chang: The signature fried chicken dishes including wings, drumsticks and combos cause about 43% of sales. However, 60% of our customers order a dish besides fried chicken, such as a side or Korean traditional dish.

But many Americans are moving away from fried foods.  How is that affecting your business?

Chang: Bonchon does primarily well on the East and West coasts, but we’re spreading to newly developing cites, such as Denver, Minneapolis and Austin.  These are cities with many higher earners and a large millennial population. We find them to being open to trying new cuisine, an important factor for us to choose where to open.

Do you have private equity funding or are you self-financing expansion?

When you open a new outlet, how do you market it and let people know about it?

Chang: First we’re lucky to get a decent amount of press whenever we open in a new location. We do social media advertising on Facebook, and third, we work with influencers to promote new locations.

Who is Bonchon’s target audience?

Chang: Our core customer is 25-to-34 year old, middle-class to upper-middle-class millennials. The main thing is millennials enjoy eating at restaurants that have less of a chain feel.  We see a trend that Applebee’s and Chili’s are declining.  We see ourselves as an “unchain chain,” offering a more authentic experience.

Li:  The average check is $31 a person, but can include two people on the ticket.  We appeal to families and friends who come together to enjoy the atmosphere and come where we serve beer and wine.

Repeat business is key. What do you do to lure them back for a second meal?

Chang: We have data that shows we have an extremely high retention rate. A consulting firm said we had 81% repeat business. The main thing is the taste. People get addicted to Bonchon and will pay a premium to get the best possible chicken.

You’re scheduled to open 25 new outlets in 2019.  How avoid the trap of growing too quickly?

Balle: It goes back to evaluating new locations and choosing developers that can handle multiple locations.

Chang: We want to open as many locations as possible; it increases brand awareness.

Any considerations of going public?

Chang: At this moment, we don’t have any plans.

How much of a threat is Bonchon to KFC?

Chang: It’s not a direct threat because Bonchon is at a competitively different price point.  As we open more express models in the future, we should be able to compete more. We want to be in more high trafficked areas–office destinations, downtown areas and food halls.