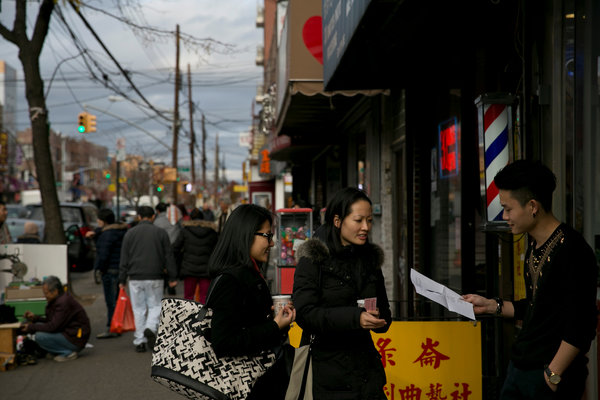 The two women had spent a couple of afternoons wandering a heavily Chinese neighborhood in Brooklyn on a seemingly straightforward quest: to find young, undocumented immigrants and enroll them in a federal program that lets them stay in the country for at least two years and work legally.

“Chipping away at the ice,” sighed Susan Pan, the legal fellow at Atlas: DIY, an advocacy group for immigrant youths, as she and her colleague, Wendy Tsang, paused to drink a restorative cup of milk tea. “Trust is extremely critical.”

Across the country, immigrant advocates have been confronting similar challenges amid a renewed push to sign up immigrants for the program, known as deferred action.

The effort has acquired a sense of urgency as comprehensive immigration legislation has stalled in Congress, dimming the possibility that lawmakers — at least in the near term — might provide a path to citizenship for those here illegally.

The program, President Obama’s signature immigration initiative, is open to certain immigrants who were brought to the United States as children. Recipients of the reprieve are protected from deportation, allowed to work and, in many states, to obtain a driver’s license; they can renew their status after two years.

“It’s the only game in town right now for undocumented immigrants, and we need to do everything to maximize participation in the program,” said Steven Choi, executive director of the New York Immigration Coalition, a leading advocacy group in New York City.

When the program started in August 2012, tens of thousands lined up to apply. But after the first few months, the number of new applications plummeted. By some estimates, about half of the eligible immigrants have not applied, with participation particularly low in some immigrant-rich states like New York and Florida and among some large immigrant groups, including the Chinese, Dominicans and Filipinos.

Advocates and government officials view the program — and the challenge of boosting participation rates — as a test run for the far more complicated process that would come with legislation that included a pathway to citizenship for the estimated 11.7 million immigrants who are in the country illegally.

The Migration Policy Institute, a nonpartisan research group in Washington, estimated that about 1.1 million people were eligible for deferred action. As of Aug. 31, about 567,500 people — or 52 percent — had applied and been accepted for consideration, and nearly 455,500 had been approved, with most of the remaining applications still under review, according to federal statistics.

But the participation rate has varied wildly depending on the immigrant group: It was at 66 percent among Mexicans, 59 percent among Hondurans and 55 percent among Brazilians, while only 16 percent of Filipinos, 14 percent of Dominicans and fewer than 9 percent of Chinese have signed up, according to a study published in August by the institute.

Among states with large immigrant populations, participation was also uneven. In North Carolina, 74 percent of those eligible had signed up, and in Georgia, 63 percent. But the rate was only 35 percent in Florida and 34 percent in New York.

Analysts have offered several possible reasons for the regional variations, including differences in the enforcement of immigration laws, the availability of public transportation and the corresponding need for a driver’s license.

But the range in application rates among immigrant groups has been harder to figure out, they said.