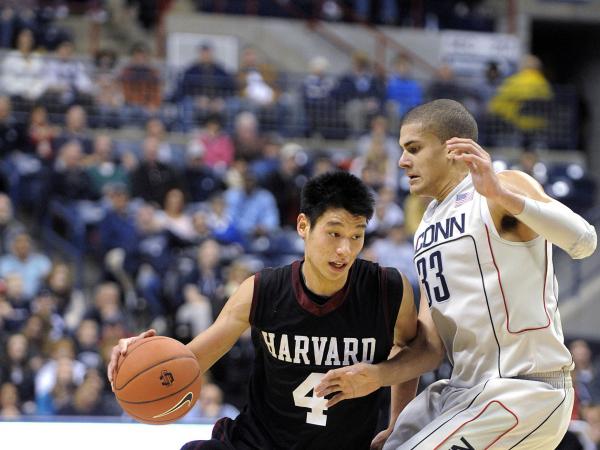 While we were looking at some NCAA stats on student athletes for a story last week, we came across a couple of numbers that made our eyes bulge: of the 5,380 men’s basketball players in Division I basketball last season, only 15 were Asian-American.Fifteen.

That’s 0.2 percent of all men’s players. To put that in perspective, consider that about 6 percent of the country’s population is Asian-American. (We should note here that the NCAA separates out Asian-Americans from Native Hawaiians and Pacific Islanders in its demographic data.)

It’s often presented as a given that Asian-Americans are less involved in sports than others in this country, and every few years, someone writes a column about how we might soon see a boom in Asian-American sports stars. (Take this column by Richard Lapchick on ESPN way back in 2002.)

There’s an argument to be made that Asian-Americans don’t need to be proportionally represented in basketball. And sure, that’s legit. But there’s a difference between being underrepresented and being virtually nonexistent, and it’s odd that the invisibility is in basketball — our most democratic popular sport, with relatively few obvious barriers to entry. No cleats. No ice rink. No pommel horse. Just a ball and a hoop.

And while Asian-Americans are vastly underrepresented among college basketball players, they were overrepresented in other sports, like fencing:

Other sports with above average participation (greater than the U.S. Asian-American population percentage of around 6%) were squash (8.2% for men and 10.0% for women), gymnastics for men (7.0%), and rifle shooting for women (6.3%).

So again: There were 20 Asian-American men playing Division I squash in 2012, more than there were in DI hoops, even as there were only 193 men who played Division I squash in the entire U.S. I submit to you that basketball and race are the two most important concerns in American life, and with another Final Four upon us, humor me in some back-of-the-envelope theorizing.

Might the paucity of Asian ball players be chalked up to the fact that Asian people are short? That’s the first thing folks might say, and if there are any biases at play, it’s a bias against the diminutive.

If it were simply about height, white men — who are a smidge taller than black men,according to the CDC — might outnumber black players in the college game, or at least be close to parity. But there are twice as many black men in DI ball as there are white guys. (Alas, there were no demographic data in that study about Asian-American men.)

And let’s consider some data points from Interbasket, a website for fans of international basketball. In 2011, it published a chart ranking the average heights of 20-year-old men from different countries. The list found that men in Asian countrieswere generally shorter — India, Vietnam, Cambodia, Indonesia and the Philippines were all at the very bottom of the list, with average heights falling between 5-foot-3 and 5-foot-4. The height of men in Asian countries doesn’t tell us much about men of Asian descent in this country. But consider that Nigeria was seventh from the bottom on that list, with an average height of 5 feet 5 inches. An Interbasket user decided to rank all of the active Nigerian players playing Division I college basketball in the U.S. in 2011, from best to worst, and he came up with a list that was 116 players long.