California reached another bleak coronavirus milestone this week, recording more than 150 daily deaths in the worst fatality numbers since the pandemic began.

But just as troubling, health officials and experts say, is how COVID-19 is stalking certain groups, such as essential workers, and those in institutions including nursing homes and prisons, at much greater rates than those who have the ability to stay home.

Californians of color are far more likely to become infected or die from the coronavirus. But the most recent surge in cases is exacerbating those inequities.

“The epidemic in the West is particularly among the Latinx community. … They are both in urban, as well as rural, agricultural areas,” said Dr. George Rutherford, an epidemiologist and infectious diseases expert at UC San Francisco. “There’s tremendous amount of transmission in Southern California, in particular in Orange and Los Angeles counties.”

The virus is spreading through the Latino community as essential workers get sick and spread the illness in their communities, Rutherford and others have noted.

The seven-day average for daily coronavirus-related deaths reached 102 on Thursday — the first time the number went above 100, according to a Los Angeles Times analysis of its county-by-county tally of pandemic deaths. Daily death tolls have soared in recent days, hitting 119 Tuesday, 158 Wednesday — a new one-day record — and 153 deaths Thursday, the second-worst daily death toll. An additional 136 fatalities were reported Friday.

A cumulative total of 8,340 Californians infected with the coronavirus have died.

Hundreds of agricultural workers in Ventura County have tested positive for the virus. One outbreak struck a housing complex that provides agricultural employers with temporary housing for their workers. In Imperial County, a rural and impoverished region with a largely Latino population east of San Diego, hospitals were so overwhelmed that at least 500 COVID-19 patients were transferred out of the county.

And while much was said early in the pandemic about how urban, dense areas like New York City were primed for catastrophe, it’s now clear that agricultural and rural areas are suffering too, with coronavirus case rates high throughout California’s Central Valley, Salinas Valley and Imperial Valley, all part of the state’s agricultural heartland.

Large outbreaks are also sickening farmworkers in the vineyards of Sonoma and Napa counties, some of whom live in Solano County, officials said.

Of eight California hospitals that received an infusion of medical staff from the federal government, five are in the Central Valley, with two hospitals in San Joaquin County and one each in Fresno, Kings and Tulare counties. Two L.A. County hospitals received teams, as did one in Riverside County’s Coachella Valley.

Social gatherings are also worsening the spread, public health officials have said. Summer parties at fraternities at UC Berkeley have been linked to 72 cases, a factor the campus cited in determining it would begin the fall semester with fully remote instruction.

As case counts and death tolls continue to spike across the state, health officials are also battling significant resistance to wearing masks in some places. In Huntington Beach, some view the pandemic as a hoax, and much of the public refuses to wear face coverings. On Wednesday, there were 690 people with confirmed coronavirus infections at Orange County’s hospitals, a 157% increase from two months ago.

Some officials have had to resort to begging their constituents to wear masks.

“Your decision not to participate costs the community dearly. As you see the numbers go up, we’ll shut down businesses. And in the end, we all get hurt together,” Clayton Chau, director of the Orange County Health Care Agency, told reporters Thursday. “So, I’m pleading — and I’m hoping that you all would help us pleading to the community — that they really, really have to follow this.”

COVID-19 — the disease caused by the coronavirus — is on track to claim more lives in L.A. County this year than any other disease except coronary heart disease.

COVID-19 has already killed nearly triple the number of people in L.A. County than died from flu or pneumonia during the most recent eight-month flu season. Between October and May, 1,521 people died from the flu and pneumonia; as of Friday, 4,300 people have died from COVID-19 in L.A. County. 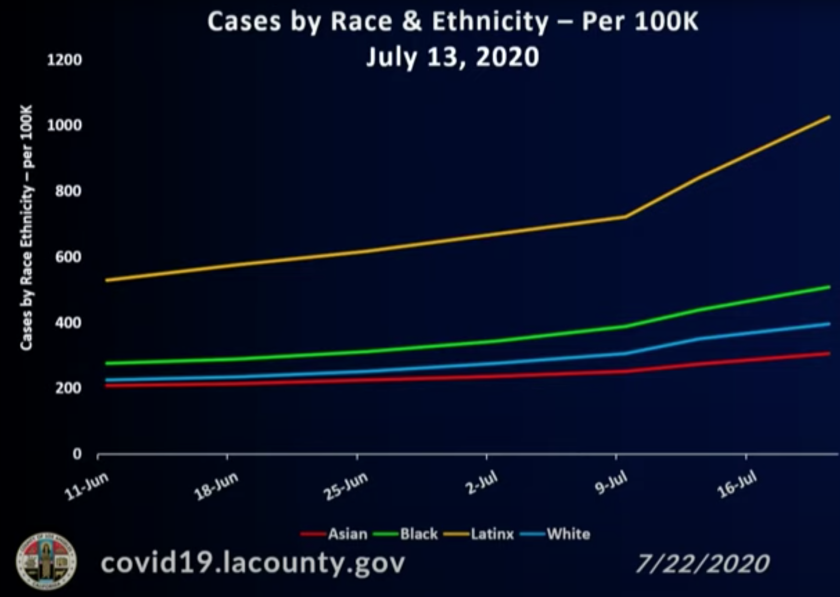 Latino residents are more than twice as likely to have been diagnosed with the coronavirus as white residents in L.A. County, and Black residents are 25% more likely than white people to have been infected, Ferrer said. (Los Angeles County Department of Public Health)

Among 15 children in L.A. County infected by a rare but serious inflammatory syndrome associated with the coronavirus, 73% are Latino. And Latina women represent 3 out of every 4 cases of COVID-19 among pregnant women in L.A. County, although Latino residents make up about half the county’s population.

Many Latina women or their partners are essential workers who may hold low-wage jobs, with little control over their working conditions, Ferrer said. “Latinx workers not only are becoming infected at a higher rate than others, but they are then more likely to bring the infection home to their family members, and this — as we have just seen — includes their pregnant partners.”

California’s COVID-19 hospitalizations hit records this week, for the first time reaching above 7,000 hospitalized. On Monday, 7,091 people with confirmed coronavirus infections were in the hospital statewide; on Tuesday, the figure was 7,170; on Wednesday, it was 6,825; and on Thursday, 6,952. Two months ago, about 3,000 people with confirmed COVID-19 infections were in California’s hospitals.

“We have more patients than ever in California,” Rutherford said.

There’s more evidence that younger people are increasingly getting infected and hospitalized. Cases among L.A. County’s youngest adults — those under 30 — rose by 109% between mid-June and mid-July, but only rose by 53% among seniors up to the age of 79.

Children saw their rate of hospitalizations for COVID-19 in L.A. County climb by 50% over the same period, while it only rose by 13% for seniors aged 65 and older.

Some urged far more aggressive action. State Sen. Steve Glazer (D-Orinda) on Thursday called for a return to a stricter shelter-in-place order for the hardest-hit counties that report 200 cases for every 100,000 residents over the past 14 days, which would include Los Angeles, San Diego, Orange, Riverside, San Bernardino, Santa Barbara and Ventura counties, along with counties in the Sacramento and San Joaquin valleys, and Marin and Solano counties in the Bay Area.

Of California’s 15 counties with death rates on a per capita basis worse than the state average in the last two weeks, 13 of them are in Southern California or the Central Valley. The two exceptions are Marin and Mendocino counties.

But there were some increasing signs of optimism. Ferrer, L.A. County’s director of public health, on Wednesday ruled out the need for a renewed stay-at-home order at least for this week.

The effective transmission rate of the coronavirus is now at about 0.94, meaning every 1 person infected with the virus on average infects 0.94 people, said Dr. Christina Ghaly, director of health services for L.A. County. That’s better than it was in June, when it rose above 1 and fueled the surge in disease.

And the number of new patients with COVID-19 requiring hospitalization in L.A. County, which had been rising, has become flat and maybe even started to decrease, Ghaly said. It’s plateaued at a substantially worse number than it was in April, but the data nonetheless suggest an improvement.

“These numbers—while they’re not going down—do appear to be stabilized,” Los Angeles Mayor Eric Garcetti said Friday evening. “And because our public health is not worsening.…we are not introducing any further closures at this time.”

In Silicon Valley, health officials warned that it was important to both protect the health of the most vulnerable and also avoid the worst impacts of stay-at-home orders.