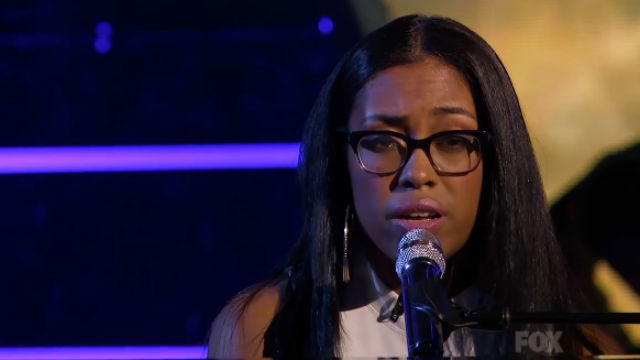 MANILA, Philippines – Filipino-American Malaya Watson redeemed herself in this week’s competition ofAmerican Idol, after she was saved from joining the bottom three. She’s now safely in the top 11 of the competition.

The previous week, she was part of the bottom 3 and faced the possibility of an early elimination.

Watson and M.K Nobilette were the final two on stage before host Ryan Seacrest announced Thursday night (March 7, Friday, in Manila), that she was safe. Nobilette joined Jena Irene Asciutto and Emily Piriz to form the bottom three.

During the previous episode, the 12 remaining contestants performed song pieces with the theme “Home.” Watson sang “Take Me to the King,” by Tamela Mann where she showcased her piano skills, and also changed up her look. Judges Keith Urban, Jennifer Lopez, and Harry Connick Jr. were pleased with the number.

“It was like you were telling a story to us. I had goosies by the end and tears in my eyes,” Lopez told Watson after the audience gave her a standing ovation. Connick Jr did say there were a few “problems,” but that it was great overall.

Her performance this week gave Watson another chance after she was almost eliminated in the “This is Me” week after singing Bruno Mars’ “Runaway Baby,” which drew mixed reactions from the judges.

Piriz meanwhile bid her Idol dreams goodbye after Asciutto and Nobilette were saved from elimination. She sang Grace Potter and the Nocturnals’ “Stars,” to determine if the judges will use their save card. Unfortunately, Connick Jr. said that they wouldn’t use it, with Lopez even commenting it was “not unanimous.”

The remaining 11 finalists are scheduled to perform next week with theme “Songs of the Cinema.” – Rappler.com