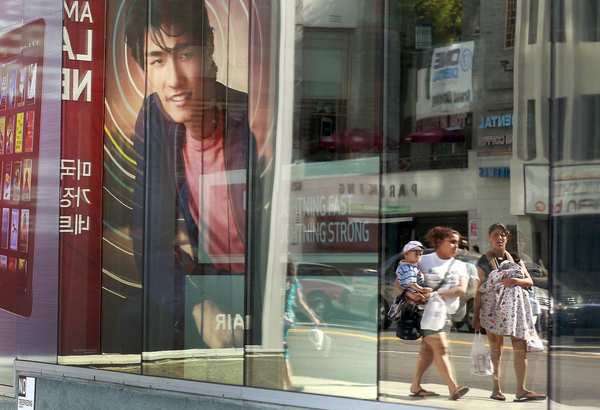 Hanmi Financial Corp., a large community bank based in Los Angeles’ Koreatown, is taking a major step out of California by acquiring Central Bancorp, a troubled Garland, Texas, company that also focuses on Asian Americans.

The deal announced Monday, for $50 million in cash, is expected to close in the second half of 2014. It would create a Korean American bank with 51 branches, second in size only to BBCN Bancorp, also of L.A.’s Koreatown.

The merged bank would have the top deposit share among Korean American banks in Texas, Illinois and Virginia, Hanmi Chief Executive C.G. Kum said in announcing the deal.

Kum said the merger would increase Hanmi’s per-share earnings by 4% in 2014 and 20% in 2015, mostly due to cost savings as back-office operations are combined and some branches closed.

Investors cheered, bidding up Hanmi shares by $2.67, nearly 14%, to $21.92 in afternoon trading on Wall Street. Koreatown rival Wilshire Bancorp traded 4% higher, and BBCN was up 1.5%.

Central Bancorp, the parent of United Central Bank, has seven branches in the Chicago area as well as nine in the Dallas and Houston areas, along with three in Southern California, two in the Virginia suburbs of Washington, and one each in New York, New Jersey and Georgia.

Principally a writer of commercial mortgages, Central was slammed by the Great Recession. It has spent the year with its lending operations essentially frozen while it whittles down its stack of soured loans under orders from regulators, bank officials said during an investor call.
Hanmi, after struggling with its own large share of bad loans, managed to raise enough new capital last year to free itself from regulatory restraints and has been on the prowl for an acquisition. Kum was hired in June with a mission to expand the bank, replacing Jay S. Yoo, who retired.